How to Bet on Greyhounds: Betting Tips & Strategy

Greyhound racing remains a popular avenue to explore for punters and we take you through greyhound betting tips, terms and strategies. 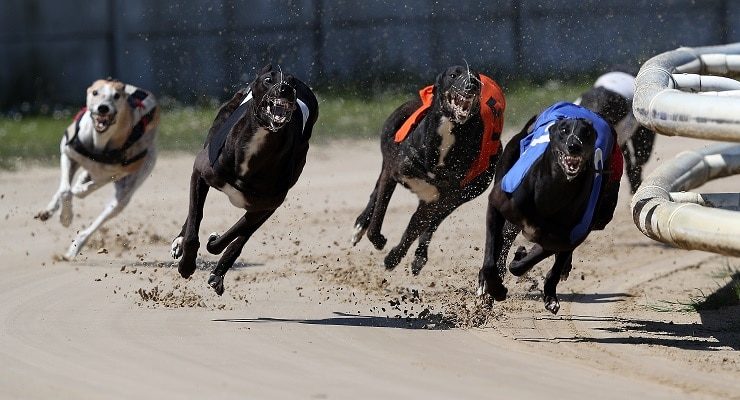 Despite a number of UK tracks closing in recent years, greyhound racing remains a popular betting product with punters due to the simplicity of the fast-paced action.

With races staged every few minutes morning, afternoon and evening, there are plenty of opportunities for dog punters to get involved throughout the day.

You Can Beat an Egg, But You Can’t Beat a Good Draw!

The above is one of the most frequently-used expressions among greyhound racing punters, and rightly so, the first port of call for any punter is a look at the draw of the six greyhounds.

Greyhounds are seeded on their racing line preference on the straights and bends during their races.

Unseeded dogs, also known as ‘railers’, prefer to race towards the inside running rail, while ‘middles’ and ‘wides’ favour middle and wide sections of the track respectively.

Open races are drawn at random and, more often than not, there is an uneven distribution of seeds – very rarely will a race be made up of two railers, two middles and two wides.

Up and Down the Grading Ladder

Greyhound racing in the UK is graded by the racing office at each track. There are a number of different types of races identified by the distance or the letter at the beginning of the grade.

‘A’ races are over the standard trip at each track which is at every venue is four bends.

‘B’ slightly shorter four-bend races occur at a handful of tracks such as Doncaster.

‘E’ or ‘M’ races are over more extreme distances known as marathon races.

The number following the letter identifies the ability of the greyhounds – the lower the number, the faster the dogs. When a greyhound wins it is standard practice for them to be upgraded and take on faster rivals next time.

Young and progressive pups can continue to improve and are worth following, as are bitches who can rack up winning sequences.

In the UK, there are a number of tracks at which finding the leader at the fist bend helps solve the puzzle of a race.

More often than ever before, graded sprints frequently feature on cards, but even over the standard trip at tracks such as Crayford, Romford, Harlow, Henlow and Pelaw Grange a very high percentage of races are settled at the first bend.

Sectionals or splits take a prominent place on any racecard and are a useful tool for punters to use.

When Staying Power is Noteworthy

Most races are run over four bends and at some tracks the standard trip is more demanding and the circuit can lend itself to strong-running types.

Doncaster, Nottingham Hove and Towcester are all demanding trips for the greyhounds and simply finding the leader will not suffice!

Some lucrative returns can be won by predicting the order of the first two or three greyhounds to cross the winning line.

A bet known as a ‘forecast’ is struck to predict the first and second places, this bet can also be reversed.

Tricast bets involve the first, second and third dogs and different permutations of the three can also be placed.

To assist with this, we’ve put together 5 top tips for betting on dogs and how using these can help to find the winners amongst these canine stars.

There are currently 19 tracks that offer greyhound racing in the UK with Oxford and Suffolk Downs set to reopen soon. With up to 6 meetings a week at each track, even the most dedicated follower of the sport can’t keep on top of everything.

The best way is to narrow your field of vision. Most regular greyhound punters will specialise either in open class racing (the highest level of the sport) or at one particular track.

Open class dogs (being better quality) tend to run to form a little more than those on the everyday graded scene. Many horse racing punters will do the same, ignore the Class 6 handicaps on a Monday and Tuesday and concentrate on Listed level or above.

A focus on a single track, perhaps the one most local to you or frequently visited can be rewarding. That laser focus easily picks up trainers in and out of form as well as any track bias.

Every track will have spells where they heavily favour inside or outside runners or times when nothing can win from behind. Those who know a single track well can pick up on these nuances far quicker than an ordinary punter.

Some tracks have more of a pace bias than others but as a punter, I’m always more drawn to a front runner on the dogs, pretty much over any distance. It’s far easier to win a race when out on the bunny at the front end than it is to pick a way through rivals from the back.

Early pace and trapping ability are not necessarily the same thing. The two ways to find this on a card are with the split time and the first bend position. Combined they can be used to play the race in your head and find the most likely leader.

As such, a dog may have a 3.25 sectional but the first bend position on the card reads 3. This is a dog who traps well but doesn’t have the same natural pace in a straight line. Another may do a 3.42 but have a 1 on the card at the opening turn, a dog that can’t trap but once they are moving, have exceptional early pace.

A quicker sectional doesn’t always mean the most early pace. They can out trap the other dogs but don’t possess the same straight line speed so fail to turn in front despite flying split times.

A track like Nottingham has the winning line almost on the first bend so sectionals alone are easier to read there. Know the track, know where the winning line is and combine the two if necessary to put yourself in pole position.

As with horse racing on the flat, the draw can win and lose a race. Greyhounds are grouped as rail runners, middle runners and wide runners. In an ideal world, there would be two of each in every race but this is not always possible, especially on the open race scene.

Both middle (m) and wide (w) runners are easily identified on a racecard with these symbols. A dog in trap 6 may well be the quickest performer in a given race but if they are a rails runner and perform best from trap 1, then this is a clear disadvantage.

A single ‘seeded’ runner is often a good starting point. 5 railers and 1 wide, the eye is automatically drawn to the 6 given what looks a perfect draw. If the 5 inside that greyhound are all railers and move left to the rails when the traps open, there is likely to be scrimaging which the sole seeded runner can avoid.

In the same way that a badly drawn favourite is one to take on, a well drawn outsider has to be of interest. They aren’t the quickest dog in the race by any means but they are going to get the cleanest path round and that can be all important, especially at a smaller circuit like Crayford or Romford.

Sit and watch the feed from your bookmaker or RPGTV and take notes of what you see. Often, with time constraints and the pressure of keeping a track running, the comments that are seen on the card from the racing office are different from what you as a viewer noted down.

This links in with the above point as well. If on their previous run from trap 1 a certain dog moved straight right and bumped the 2 and next time out it’s in the same trap with the hot favourite next door, that’s a perfect angle to find some value wider out. Racecard comments are only opinions of those in the racing office, don’t take them as gospel.

This is a hugely important date for bitches coming out of season. There is a mandatory stand down of 3 weeks following a bitch being reported in season but they won’t reach the peak of their form again until around 16 weeks after that date.

A season date can be found on the racecard, in brackets (Ssn 21 Aug ’21) for example. That bitch would be expected to be at the peak of her powers around the 11th of December. This angle is one that can find some nice price winners and impress friends you’ve taken to the track.

Some come back to hand quicker, some slower but it’s an interesting angle in, especially in graded races if a bitch has dropped a couple of levels post season. They may drop a hint around 12/13 weeks that better is coming and into the notebook they go.

They are just a few simple things to look out for which can make a better and more consistent greyhound punter. It’s an incredible sport so go out, enjoy the racing and always gamble responsibly.