UFC Betting Guide for Beginners and Beyond

Our UFC expert presents his betting guide which shows you how to maximise your chances to make money from betting on the UFC and Bellator. 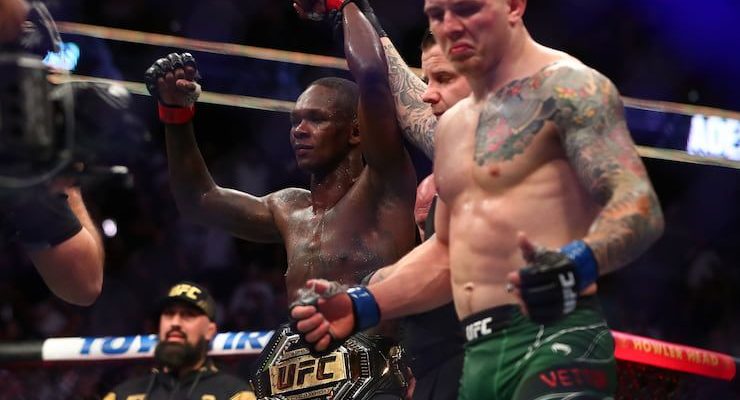 Faithful readers of this column (millions and millions strong!) probably feel like some of my picks are determined by the flip of a coin or toss of a dart. But I assure you I actually put real time and research into the betting advice I put forth, honest, cross my heart.

So, with the UFC having a rare off week this weekend, I figured now would be a good time to peel back the curtain and reveal which stats are the key ones I use to help make my winning picks (I’m hitting 55% picking every fight on every UFC card since the start of 2020, so I’m not doing too shabby).

It’s not the most exciting of strategies, and probably won’t make you money in the long run but putting your money on the betting favourite on the board will win you 66% of your bets. Turns out the bookmakers know what they are doing when they set and reset their lines for fights. However, as hinted at above, if you bet all the favourites on every fight on every UFC fight card you won’t end up ahead in the long run (I don’t have the actual numbers crunched but I’ve fiddled around with it in the past and determined it’s a losing venture). Plus, blindly betting the favourites for every fight would be boring and remove the thrill of zeroing in on – and actually nailing – a live dog. What this number (66%) does tell you is that on a 12-fight UFC card, on average eight favourites will win and four dogs will come through. So perhaps if in doubt with a pick, go with this stat and ride the betting favourite.

Another ‘if in doubt’ scenario here – if you are having trouble distinguishing between two fighters, bet on the better striker of the two. Which makes sense since every fight, and every round of every fight, begins on the feet in a striking battle. But how do you determine which fighter is the better striker heading into a fight. My method, which has been 64% successful pinpointing a winner of a fight before hand, is to compare two fighters’ striking stats on UFCStats.com.

When clicking on a fight matchup on this site you are given four different striking stat categories you can compare between the fighters: strikes landed per minute, striking accuracy, strikes absorbed per minute, and defense (% of strikes successfully defended). So, we’ve got two offensive and two defensive stats. I then very simply compare each fighter’s numbers to one another in each category, and whichever fighter wins the most categories I deem the better striker. Perhaps it seems basic and primitive, but a 64% success rate isn’t too basic.

Pretty much every UFC fight card goes through some last-minute flux, with fights and fighters falling off and being added on. This was/is especially true during this pandemic era, as health protocols and travel/visa issues have wreaked havoc with fight cards.

My betting advice regarding this is to fade any fighter taking a fight on less than one month’s notice. These fighters have only won 40% of their fights since the start of 2020. Unless you think that the replacement fighter is head and shoulders better than his/her opponent, go with the fighter who has a full training camp rather than the short notice one.

My final piece of advice is to bet on the younger fighter in matchups. The younger fighter in a fight has won 60% of the time since I started tracking this stat, and while I don’t have the exact numbers, I’m pretty certain this stat only gets higher the larger the age gap is between two fighters. Sports are a young man/woman’s game, and fighting is no exception to this rule. Invest your money in the youth.

Jeff Fox offers expert insight into the world of MMA & UFC betting from his years of experience in the industry. His work has appeared in publications such as SI.com, St Louis Post-Dispatch, SLAM, Fighters Only Magazine & FIGHT!, among many others. Jeff shares his UFC betting tips with MansionBet readers on a weekly basis.
All Posts
Related Posts
Golf Betting Guide – How to Bet on Golf
Steve Palmer 20/09/2021 08:15
How to Play CS:GO: Beginner’s Guide
David Hollingsworth 10/08/2021 08:09
Football Betting Guide: How to Bet on Football
Mark Langdon 17/06/2021 16:02
How to Bet on Greyhounds: Betting Tips & Strategy
Matt Newman 20/04/2021 10:13