5 Most Successful Female Jockeys at the Cheltenham Festival

Horse racing is one of the few sports where men and women compete equally and the modern era has seen a number of female jockeys excel on the biggest stage of all, the Cheltenham Festival. 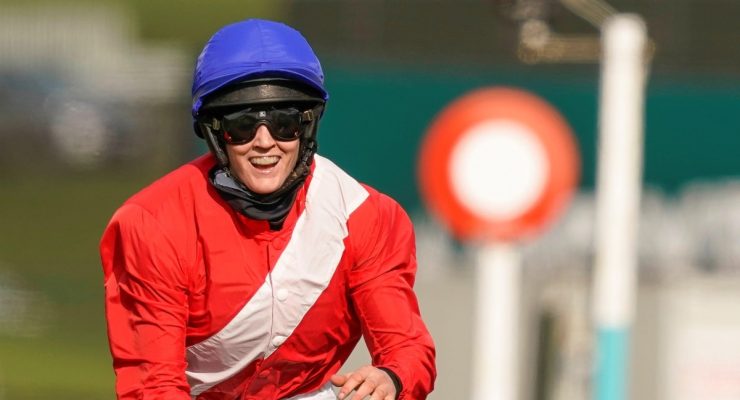 For many years jumps racing was a man’s world but barriers have come down in the modern era and that includes the rise of female jockeys at the Cheltenham Festival.

An ever-increasing pool of female talent is evident in the weighing room and racing is one of the few sports where men and women compete as equals.

In all, there have been 14 winning lady riders at the Cheltenham Festival.

The first was Caroline Beasley in the 1983 Foxhunters Chase on board Eliogarty and while there were a sprinkling more down the years – including Lizzie Kelly becoming the first as a professional on Coo Star Sivola in the 2018 Ultima Handicap Chase – it was in 2021 that the game changed dramatically!

Here’s our list of the five most Successful Female Jockeys at the Cheltenham Festival – the Olympics of jumps racing.

Frost has emerged as Britain’s pre-eminent female jumps pilot in recent times. She is based at the Ditcheat yard of champion trainer Paul Nicholls and is a trusted aide for the top trainer. Nicholls has provided her with both Cheltenham Festival winners so far.

She partnered Pacha Du Polder to win the St James’s Place Foxhunter Chase in 2017 when still riding an amateur and has since added a glorious Ryanair Chase win on Frodon in 2019. Frost is synonymous with ‘The Dude’ and the front-running ride she gave him to fend off all challengers in that Ryanair won her wide acclaim. There are surely more Festival successes ahead.

In 2018 Lizzie Kelly broke new ground for female jockeys as she became the first fully-fledged professional to win a race at the Cheltenham Festival, steering home Coo Star Sivola for stepfather Nick Williams. Kelly kept things simple aboard the market leader, settling in just behind the leading group, before allowing him to stride to the front before the home turn. Shantou Flyer came to challenge but Kelly and Coo Star Sivola held on gamely.

Katie Walsh is from racing royalty. Her father, Ted, is amongst Ireland’s most popular trainers/pundits, while brother Ruby has ridden more Cheltenham Festival winners than anyone else.

His younger sister joined him in 2010 when steering Poker De Sivola to win the amateur riders’ National Hunt Chase for trainer Ferdy Murphy. It was to be a week to remember, as the Friday also saw Katie bringing Thousand Stars home in front at 20/1 in the County Handicap Hurdle for Willie Mullins. She narrowly lost the battle with her brother that week – as Ruby had three winners!

For Irish racing fans of a certain vintage, the phrase “Nina in the bumper” will forever draw a smile, but surprisingly the Champion Bumper wasn’t amongst her seven Festival wins.

Like Walsh, Nina Carberry came from a racing background, with her father, Tommy, a former jockey and brother, Paul, perhaps the coolest rider of his generation.

Owner JP McManus was one of her strongest backers and she partnered three successive Cross Country Chase winners in his green and gold hoops from 2007-2009 on board Heads Onthe Ground and Garde Champetre (twice) for the master of the banks, trainer Enda Bolger.

She would again claim that race in 2016 on Josies Order (by appeal), while there further Festival wins on Dabiroun in the 2005 Fred Winter Handicap Hurdle and via the legend that was On The Fringe in the St James’s Place Foxhunter Chase in 2015 and 2016.

Rachel Blackmore stands apart from the rest as being the most successful ever female jockey to ride at the Cheltenham Festival.

Rachael Blackmore first shot to Cheltenham Festival glory in 2019 when A Plus Tard won the Close Brothers Novices’ Handicap Chase by a huge margin for trainer Henry De Bromhead. It was to be a sign of things to come.

The same year, she brought 50/1 chance Minella Indo home to win the Albert Bartlett Novices’ Hurdle – again for De Bromhead – landing her first Grade 1 in the Cotswolds in the process. Interestingly, that pair would finish first and second – with Blackmore on the runner-up A Plus Tard – in the 2021 Gold Cup.

However, that setback did nothing to dispel the historic feats of her 2021 Festival, at which Blackmore was crowned leading rider over the four days – an historic moment for female riders.

She appeared to ‘own Cheltenham’ in that week. It began on day one as Honeysuckle – on whom she had won the Mares’ Hurdle in 2020 with an inspired ride – strode to glory in the Champion Hurdle (first female to win that race) and there would be five more Festival winners for Blackmore – Bob Olinger in the Ballymore, Sir Gerard in the Bumper, Telmesomethinggirl in Dawn Run Novices’ Hurdle, Allaho in the Ryanair Chase and Quilixios in the Triumph Hurdle.

An amazing haul of glory in the Cotswold propelled Blackmore to top this chart and she surely is only just getting started. Different to the others on this list. Rachael’s background was not in racing. Hard work, determination and will to win have taken her right to the top of her chosen sport.