5 Most Successful Trainers in History of the Cheltenham Festival

The Cheltenham Festival in March is the most talked-about race meeting of the year. 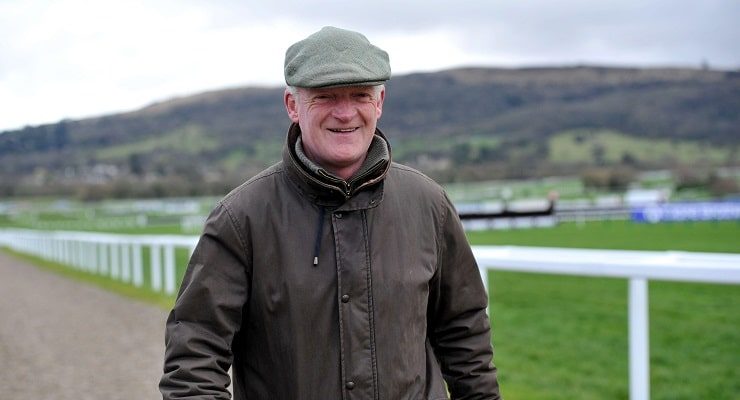 For four majestic days, National Hunt racing is the sport that dominates headlines to an unparalleled level. Here’s a look at the five most successful trainers in the history of the Cheltenham Festival.

The juggernaut that is Willie Mullins shows no signs of abating. The soft-spoken Irishman has been crowned leading trainer at the Cheltenham Festival seven times in the last nine years and his stunning tally stands at 78 winners after he added six more in 2021, edging out Henry De Bromhead on a countback for top trainer purposes.

The likes of Hurricane Fly, Annie Power and six-time Festival winner Quevega are amongst Mullins’ best-known winners but perhaps his magical moment came in 2019 when Al Boum Photo finally saw him landing the Gold Cup.

Mullins had a long list of near misses in the Blue Riband before Paul Townend brought Al Boum Photo home in front. They’d retain the crown in 2020 before finishing third last time out.

Nicky Henderson has been saddling Cheltenham Festival winners for nearly four decades and the Seven Barrows supremo shows no signs of slowing down. Henderson has been leading trainer at The Festival on no fewer than nine occasions, sharing the accolade three times in that run.

See You Then in the 1985 Champion Hurdle was his first winner and his running tally of eight wins is a record in the two-mile hurdling Championship contest, with the mare Epatante his most recent scorer in 2020.

Henderson has triumphed in 20 different contests at The Festival, including Gold Cups with Long Run and Bobs Worth.

He’s won six Queen Mother Champion Chases, including in 2018 and 2019 with the superb Altior, but perhaps the rejuvenated Sprinter Sacre’s second win in 2016 is the one Henderson would be least likely to give back.

Paul Nicholls established himself as one of Cheltenham’s outstanding trainers in the early 2000s when he choreographed the fabulous careers of superstars like Kauto Star, Denman, Big Buck’s and Master Minded – winners of three Gold Cups, four Stayers’ Hurdles and two Champion Chase crowns between them in a golden era for Nicholls’ Ditcheat yard.

Few will ever forget the build-up to the 2008 and 2009 Gold Cups when stablemates Kauto Star and Denman captured the public’s imagination ahead of two bruising battles for the biggest prize in jumps racing.

Kauto Star, winner in 2007 and second to Denman in ’08, became the first and so far only horse to regain the Cheltenham Gold Cup when he delivered a flawless performance in 2009.

Welsh-born Fulke Walwyn saddled 40 Cheltenham Festival winners across a 40-year stint from 1946-1986. His tally is impressive given there were fewer races to compete for in that era and his record stood until 2012 when a certain N J Henderson overtook him.

Amongst his tally were four Gold Cup and two Champion Hurdles. The great Mill House won the Blue Riband in 1963 before twice finishing second to Arkle in ’64 and ’65. The first of those defeats was arguably one of the best moments of Walwyn’s Cheltenham career, even in finishing second to the great horse.

The son of a West-Country bookmaker, Pipe went on to become one of Britain’s most successful trainers of all-time, crowned champion trainer on 15 occasions.

He twice won the Champion Hurdle with Granville Again in 1993 and novice Make A Stand in 1997, the latter in the hands of AP McCoy, the perennial champion jockey whose insatiable appetite for winners matched that of Pipe’s. A Gold Cup eluded Pipe at Cheltenham, but his career was famed for plotting memorable wins in handicaps.