Cheltenham vs. Aintree: What’s the Favourite? 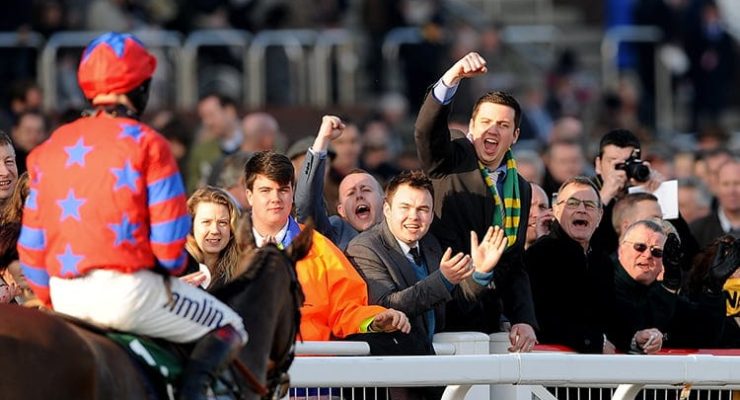 The National Hunt racing season is in full swing. The soft winter ground perfect for jumping. In just a few days, the first jewel in the jump racing crown roars into action, as the legendary Cheltenham Festival leaves the starting gate on Tuesday March 10.

Three weeks later, the action moves from Gloucestershire to Merseyside with the Grand National Festival at Aintree. Few would deny that the Grand National is one of the greatest races in the world, but does this one 6,907 metre race give Aintree the edge over its southern rival?

We’ve got the facts and the figures. We’ve scoured the forums and consulted the experts. We’ve split the judging into five different categories. In the end, it was a close-run thing. Who will be first past the winning post?

Cheltenham and Aintree both made their debut at the start of the 19th century. The first organised flat race meeting in Cheltenham took place in 1815. The first official recorded Grand National was in February 1839; known then as the Grand Liverpool Steeplechase. Horses had to jump a stone wall, cross a ploughed field, and finish over two hurdles.

Meanwhile in Cheltenham… violent protestors, encouraged by anti-racing priest, the Reverend Francis Close, burnt the racecourse grandstand to the ground. The attack in 1830, prompted the move to the Cheltenham Festival’s current location – Prestbury Park – in 1831.

The Grand National’s current course was established in 1839 and the race was flipped from a weight-for-age race to a handicap in 1843. Basically: the race has not changed for nearly 200 years. The Cheltenham Gold Cup, however, was not created until 1924. The aim was to create a race that would encourage farmers to breed high-class horses: a true steeplechase.

So… Both meetings began life in the earlier 19th century but the Grand National is the race with the true heritage and the global reputation. This is a win for: AINTREE

One swallow doesn’t make a summer and one race doesn’t make a meeting. The hype around the Grand National makes it easy to forget that it is just one race in a three-day National Hunt meeting.

The Grand National Festival kicks off on April 2, with Liverpool’s Day: a tribute to the people of the city with seven races, including four Grade 1. Friday is Ladies Day, where style and fashion share the spotlight with four more Grade 1 races.

Saturday is Grand National Day. Eight minutes of National Hunt racing, watched by millions. In fact: it is a Grade 3 handicap race. This is the Blue Riband event: the race everyone wants to bet and watch.

In Cheltenham, the equivalent is the Cheltenham Gold Cup. Although very well known among sports fans and horse racing enthusiasts, the Gold Cup is nowhere near as reputable as the Grand National.

Cheltenham, however, has four days of racing and 15 Grade 1 races; a chance for visitors to see the best horses in the world compete. Every day at Cheltenham has an important race. Day one is the Champion Hurdle; day two, the two-mile Queen Mother Champion Chase; Day three: the Stayers’ Hurdle; with the Cheltenham Gold Cup on day four.

So… Although the Grand National is one of the best known races in the world, when it comes to racing and value for money, Cheltenham is a three-course dinner of equine entertainment. The Grand National is a stunning entrée but not enough to beat its southern competition. This is a win for Cheltenham.

The Cheltenham Festival has seen a few legends in its lifetime. The 1930s belonged to a horse called Golden Miller which won five Gold Cup races in a row, from 1932 to 1936. Only snow stopped a sixth in 1936. He also won the 1934 Grand National: a unique double in the same year (other horses have won both events but not in the same year).

There have been some exhilarating races at Cheltenham but – when it comes to drama – Aintree is the winner. Not only is there the legend of three time winner Red Rum, but there is also the remarkable story of cancer survivor Bob Champion and Aldaniti in 1981. Add in a few familiar names like Peter O’Sullevan, Jenny Pitman, and Richard Dunwoody and… This is a win for Aintree.

When the horse racing is over or the trackside crush is too much, there are plenty of distractions on offer at both Aintree and Cheltenham. On Liverpool’s Day at Aintree, Beatles tribute act the Mersey Beatles are working their way through the fab four’s catalogue. Friday is a George Michael tribute act and Saturday is strictly racing.

Of course, if you’re at Aintree, Liverpool is waiting to be explored and its neighbour Manchester is a short hop away. Further afield are the delights of the Peak District, Yorkshire Dales, and the Lake District.

Cheltenham’s nearest area of natural beauty can be seen from the race course. Prestbury Park sits on the edge of the Cotswolds. It’s a short drive to Gloucester, Bristol, and Bath. However, the entertainment at the Cheltenham Festival is second to none. There is a full line-up of bands every day, as well as DJ sets from the likes of Nick Grimshaw and Roman Kemp. Throw in free rides on the Ferris wheel and carousel and… This is a win for Cheltenham.

The deciding category is betting. Where is the action? For many people, the Grand National is their one bet of the year; a chance to log on to their favourite online sportsbook and make a real money wager. There are forty runners and long shots to play and pray for. Sometimes they come in. Mon Mome won in 2009 with odds of 100 – 1. Just think: a £10 bet would have netted you a £1,000 win.

But Cheltenham is the festival for the betting aficionado. With less influence from handicappers, and more Grade 1 races than any other National Hunt meeting, Prestbury Park is where the serious players make a punt. This is a win for Cheltenham.