An eight-race card kick-starts the 2022 edition of Glorious Goodwood on Tuesday afternoon. 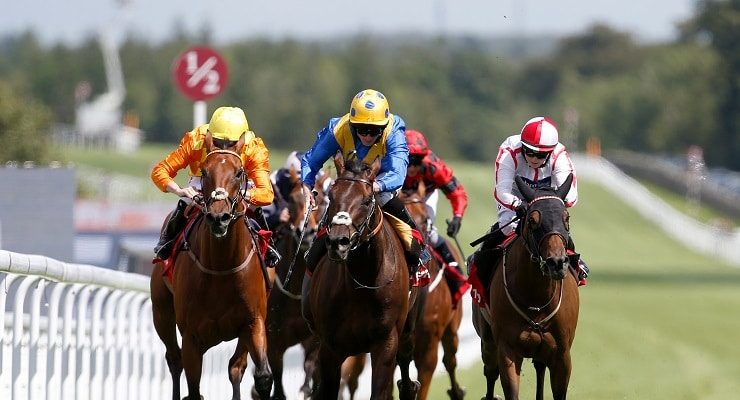 The world-famous Glorious Goodwood Festival roars into action on Tuesday afternoon with the prestigious Goodwood Cup the main event of the opening day.

Note: the following betting tips refer to the 2021 edition of the Glorious Goodwood Festival; check back here on the week of the event for updated previews and predictions.

Last year’s Cambridgeshire scorer MAJESTIC DAWN made a pleasing return to action last month at Windsor over a mile and should be well-suited now back up in distance. Both that Newmarket success in September and his return came in the blinkers he sports here and he still has scope for better in the headgear. He has won on heavy, too, so can be relied on to act on the ground. Last year’s winner Maydanny joins John Smith’s Cup one-two Johnny Drama and Cockalorum amongst the dangers.

BERKSHIRE SHADOW made it 2-2 when he won the Coventry Stakes at Royal Ascot last month for Andrew Balding and Oisin Murphy and he was very strong through the final furlong of that stiff 6f test. On that evidence, he can be expected to get this extra furlong and he will be hard to topple if handling this slower surface. Main rival Lusail is proven at this distance from his Newmarket novice win and bagged a Group 2 at HQ earlier in the month.

Last year’s winner Space Blues is respected again, while Khuzaam is a possible each-way player stepping back up in trip for Roger Varian but the strongest claims are held by CREATIVE FORCE, a Charlie Appleby-trained stablemate of the reigning champion. He won 4-4 to start this season, including a soft-ground Jersey Stakes at Royal Ascot last month, and his subsequent two-length defeat in the Group 1 July Cup cannot be viewed as a backwards step. Eased in class and up in trip, James Doyle’s mount makes plenty appeal.

It would be majestic to see Stradivarius complete a five-timer in this great race but perhaps last month’s Gold Cup at Ascot was the first sign that time is catching up on him. Spanish Mission, Sir Ron Priestley and Serpentine are amongst the contenders for his crown but perhaps the rain has done them no favours. Not so Alan King’s TRUESHAN, winner of the Group 1 Long Distance Cup at Ascot last term on soft ground. Conditions are now right in favour of Hollie Doyle’s mount and they could soon be jostling for favouritism.

Latest Odds for the Goodwood Cup

The Group 2 Temple Stakes at Haydock brought an end to JABBAROCKIE’s excellent spring form but he was found to be lame after that race and can be forgiven. Eric Alston has given him a break since and the booking of William Buick is a major plus-point for the gelding as he goes back handicapping. Rewaayat has form over C&D and joins King Of Stars in heading up the alternatives.

The betting will reveal plenty more in regards to newcomers Dangerous Rascal and Monet’s Sunrise. Any moves for either would be noted, with the latter representing Richard Hannon and Ryan Moore, who teamed up with a newcomer to bag this in 2018. SCATTERING was doing his best work in the closing stages when third at Newcastle over 5f on the Tapeta last month in his debut. William Haggas’ Showcasing colt should improve on that now up in trip.

Riknnah drops in class after coming up shy at Newmarket last time. Simon & Ed Crisford’s filly may have more to offer but ZWELELA is one that threatens to be suited on this softer ground. Her penultimate run at Newmarket (7f, good to soft) suggests conditions are in her favour and she met some traffic since at Doncaster. She strictly must prove she gets the mile but, off a light weight, may just do that.

Clive Cox and Hector Crouch could tea up to and the day one finale with ISABELLA SWAN. The Twilight Son filly won over C&D in June and is capable of rebounding from a lesser effort on very fast ground soon after at Bath. She had looked quite progressive previous to that run and may still have more in the locker if she proves herself on this slower surface (untested on slower than good). Caroline Dale is the alternative, given she will have no worries on the forecast ground.

*Odds correct at time of writing.