How Many Grey Horses Have Won the Grand National?

How many grey horses have won the world's greatest steeplechase at Aintree down the years? 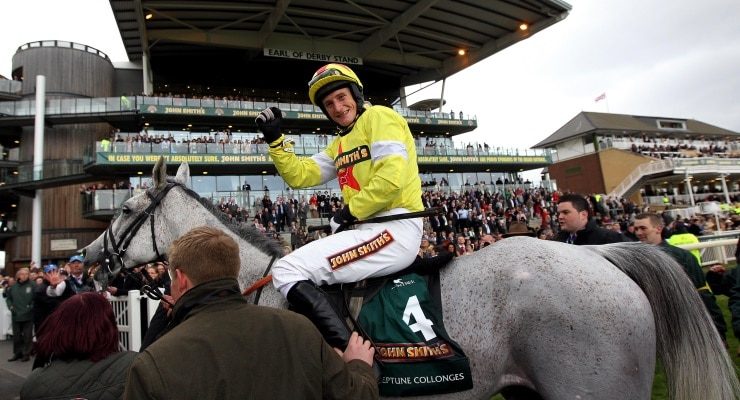 A quiz question answer worth knowing? Or a possible way to aid your betting choices when the Aintree Grand National rolls around?

Either way, do you know how many grey horses have prevailed in the world’s greatest steeplechase?

The answer is that only three grey horses have won the Grand National, although they’ve managed to win it four times between them. Be warned, however, if past endeavours are anything to judge by, it might be a while before we see another grey winner over the famous Aintree fences.

Neptune Collonges ensured the wait was not quite as severe in this century when he won a vintage renewal in 2012.

The Lamb Doubles Up

The Lamb first claimed the great race as a six-year-old – far from an uncommon occurrence in that era – when he was ridden to glory by Mr George Ede for trainer Ben Land. He was 9/1 chance to score on that occasion and three years later he’d repeat the trick at Aintree.

This time he was under the eye of trainer Chris Green – a dual winning rider in the Grand National himself – and was partnered on the day by Mr Tommy Pickernell. He carried 11st 5lb to victory in that second win and was sent off an 11/2 chance in the betting.

Nicolaus was the Second Silver success

A remarkable 90 years would slide by before another grey prevailed in the Aintree showpiece and then it was the appropriately named Nicolaus Silver that scored for trainer Fred Rimell – a man that became known as ‘Mr Grand National’ when he ended his career with four winners in the race – and ridden by Bobby Beasley.

Again, there was a long wait for the next grey winner before the Paul Nicholls-trained Neptune Collonges earned the distinction of becoming only the third grey horse to win in the 173-years of the Aintree Grand National in 2012.

Sent off a 33/1 chance, Neptune Collonges and jockey Daryl Jacob held off Sunnyhillboy by a nose to win in a photo finish; a feat that remains the slenderest winning margin of any Grand National scorer in history.

That win also gave Nicholls – champion jumps trainer in Britain on ten occasions to date in his career – his first and, thus far, only win in the Aintree Grand National.

Greys are always popular in the National at Aintree and there have been plenty of near misses in recent times, with Suny Bay (1997 and 1998), What’s Up Boys (2002) and King John’s Castle (2008) all finishing second in the Aintree marathon.

Who will become the fourth grey to land jumps racing’s most recognisable race?