It is day two of the York Ebor Festival and there are seven races coming your way, including the Darley Yorkshire Oaks. 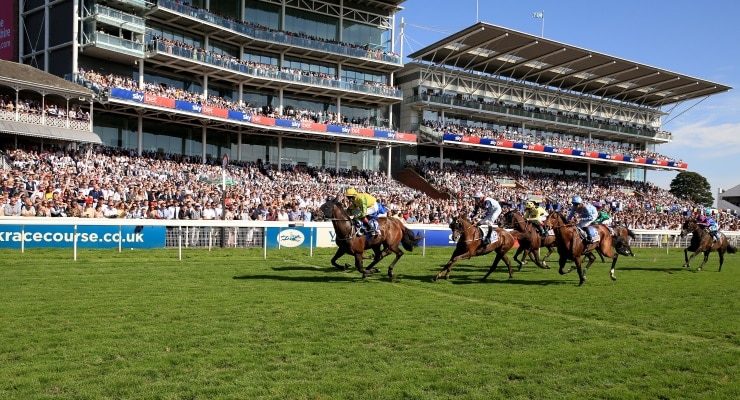 Another cracking day of racing is in store at York on Thursday as they host day two of the ‘Welcome to Yorkshire’ Ebor Festival.

The fillies’ take centre stage, with the Group 1 Darley Yorkshire Oaks at 3.35pm the feature event on the Knavesmire.

It’s tough to argue with SANDRINE in the Lowther. She’s looked the classiest 2YO filly in Britain having won the Albany and Duchess Of Cambridge Stakes in two runs since a winning bow at Kempton in May.

She had a few of these behind at Newmarket last month, handles any ground and will be a tough nut to crack even allowing for a 3lb penalty. Glorious Goodwood winner Illustrating and C&D scorer Outside World are two with scope for better and, therefore, have place claims.

Korker looks a player for Karl Burke and has shown a pleasing attitude in his races thus far, while Smullen wasn’t beaten far in the Ballyhane Stakes in Ireland recently and the aptly-named Kevin Ryan inmate would prove a popular winner here.

Richard Hannon won this last year and has a strong hand now with System and SYMPHONY PERFECT.

The former shaped okay in the Group 2 Princess Margaret Stakes at Ascot last time, but her stablemate is best forgiven a luckless trip to Newmarket last time and Rossa Ryan’s mount had shown enough prior to that be a player here.

Baashir had Gifted Ruler behind in second when scoring at Doncaster last month over 7f, both are players now.

Glorious Goodwood winner Maydanny flopped at this meeting last year, but again comes here on the back of a win at the Sussex festival.

FAME AND ACCLAIM is warming up after three starts for Les Eyre. The former Joseph O’Brien inmate was third in a 17-runner C&D event last month and has run well again since at Newmarket. He can harbour place claims with Hollie Doyle now on board.

This surely is destined to be an Oaks hat-trick for SNOWFALL after she followed up a record-breaking Epsom victory with an 8½-length demolition of her rivals at the Curragh.

She also won the Musidora over shorter here in May and so will have no worries on the Knavesmire. Like Enable and Love in recent times, she can add this race to earlier Classic glory at Epsom.

Wonderful Tonight would be a worthy rival granted softer ground, but David Menuisier’s smart 4YO doesn’t look like getting that much ease.

Latest Odds for the Yorkshire Oaks:

Maglev looked a touch unfortunate at Chester last time and has valid compensation claims now despite this being very competitive.

Highland Premiere surely wasn’t at his best last time at Goodwood and shouldn’t be written off, but CAIO SHARK landed a Haydock novice (7f, soft) in May on third start for Michael Bell.

The Kodi Bear colt looks the type to make further progress after a break now entering the handicap ranks. He also gets Hollie Doyle’s assistance here.

The standard is probably set by Dermot Weld’s raider Amma Grace, who shaped well in a Cork Group 3 last time, but it’s noted that John & Thady Gosden are wasting no time stepping PENNYMOOR into this grade.

The Frankel filly routed her rivals by nine-lengths at Kempton 15 days ago when tackling this trip for the first time and could be well up to this more taxing assignment now with Frankie Dettori taking over.

The hat-trick seeking Spirit Of Bermuda is a major player for William Haggas, while handicap debutante Makinitup for Jane Chapple-Hyam and consistent Star Of Emaraaty are others worth noting.

However, David O’Meara’s IMPROVISED is progressing nicely and could take some halting. The Raven’s Pass filly has won all three starts on turf and had two next-time-out winners behind when making a winning handicap bow at Epsom three weeks ago.

She’s 4lb higher and a big contender with Silvester De Sousa on board.

Visit our Ebor Festival Results Page to see if you backed a winner this year!