We take a look at the top five biggest venues to have hosted the prestigious World Cup final.

While American Football claims that the Super Bowl is the greatest show on Earth, the World Cup final remains the oldest and most illustrious showpiece of any sport to many.

Here we look at the top five biggest venues to have hosted the decider and compare them to the venue of this year’s World Cup final, the Lusail Iconic Stadium in Qatar.

At 80,000 people it comes up short to some of its more illustrious predecessors.

Building work started on the most famous stadium in football in 1948 and two years later it hosted the final in front of a reported crowd of 199,854.

It remains the largest crowd to have been present for the final, although suggestions were that even more people were in the ground that day then officially recorded.

Uruguay stunned hosts Brazil with a 2-1 victory and Germany got the better of Argentina with a 1-0 win in extra time when the venue played host once again for the 2014 final.

A mere 74,738 were on hand to watch the match that day following years of renovations that had limited the capacity of the bowl-shaped arena.

The 1970 World Cup final is arguably the greatest of all time as the all-conquering Brazilian side consisting of stars such as Pele, Jairzinho and Carlos Alberto ran out comfortable 4-1 winners against Italy in front of a 107,412 crowd.

Pele opened the scoring and the Samba Stars never looked back. The Azteca was on hand to host another famous final in 1986 when Diego Maradona led Argentina to a famous 3-2 victory over West Germany, with 114,600 reported to be packed in the stands that day.

England’s one and only World Cup triumph came on home soil in front of the old Twin Towers and 96,924 were packed into the famous old stadium that day to see Bobby Moore and co overcome their old adversaries West Germany. You know the rest.

A whopping 94,194 were crammed into the Rose Bowl in 1994 to watch Brazil take on Italy in what is generally regarded as one of the worst finals in World Cup history.

A drab 0-0 affair went all the way to penalties where Italian talisman Roberto Baggio ballooned the decisive spot kick.

Primarily an athletics arena, the Rose Bowl boasts a record attendance of 106,869 but these days can squeeze in a mere 85,000 or so.

Weighing in at 90,000 fervent followers on the day, the 1982 edition of the World Cup final is another of the most iconic events in football history.

A slow-burner of a contest came alive in the 57th minute as Italian hotshot Paolo Rossi opened the scoring and the floodgates at the home of Real Madrid.

Three more goals followed in the final 30 minutes as Italy ran out 3-1 winners over West Germany with 40-year-old goalkeeper and Azzurri captain Dino Zoff becoming the oldest player to win the World Cup.

A sports journalist for over 15 years, Aidan has been part of written and audio coverage on a wide-ranging number of events. Having played and coached at amateur level, he offers in-depth insight and opinion into the world of football in particular.
All Posts
Related Posts
Sergio Aguero in Profile
Steve Davies 21/04/2022 14:11
Five Best German Players to Play in the Premier League
Thomas Hill 05/04/2022 10:53
Canada’s 5 Greatest Sports Stars Of All Time
Bobbie Jackson 26/03/2022 12:57 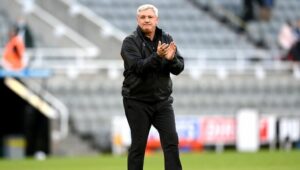