Darts Betting Guide: How to Bet on Darts

We take you through a guide to how to bet on darts and pick out the best wagers and betting tips. 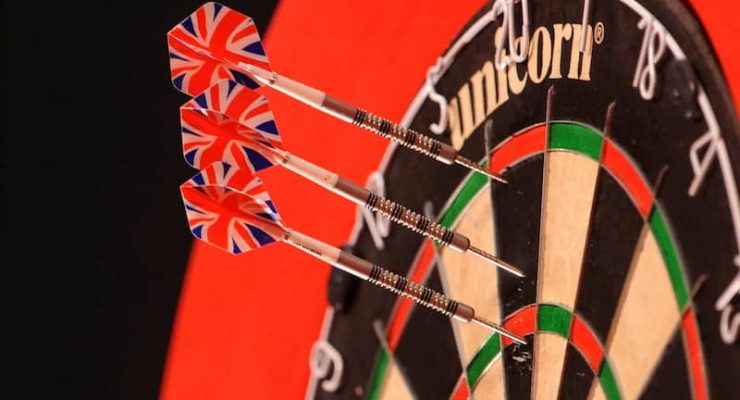 Darts has never been more popular and that means there are plenty of betting opportunities.

There are essentially three types of professional tournaments.

Firstly, there are the big events, such as the World Championship, World Matchplay and the UK Open, which are broadcast on television.

Then, away from the majors, there are the Pro Tour tournaments, which are played on multiple boards, and make up the bread and butter of the sport. These keep players busy during the gaps between the big competitions and help to form rankings.

The final variety is the Premier League, which is a one-off, as it’s played over a league format culminating in a final showdown at the O2 Arena in London.

There are many ways to place a wager on these events with outright betting an obvious starting point.

This is essentially picking the winner, and runner-up for each-way purposes, of any given event. Most tournaments are fixed-draw, meaning you can plot each player’s route to the title and evaluate their chances of winning in relation to their price.

This is often an opportunity to hunt for big-price winners as some lesser ranked players will start tournaments at 66-1, 100-1, 200-1, 500-1 or at even bigger odds. Obviously, higher-ranked players win more often, and that is usually reflected in the betting.

Seeding often plays a huge role in the outcomes of tournaments as the top seed will always be housed in the opposite half of the draw to the second seed and so on. This is when it can pay to place an each-way bet, meaning if your player makes the final you will get paid out, even if they don’t lift the trophy.

Match betting is self explanatory in the respect you are trying to pick the winner of a two-man contest. Unlike football and other sports there is no draw in darts betting, apart from in the league phase of the Premier League, and that is often to the punters benefit.

The darts tour is fiercely competitive and that means there are plenty of close matches, in terms of the betting, but there are also short-price favourites and the opportunity for upsets.

When a match looks too one-sided, which can be the case at the start of tournaments, there are plenty of other betting markets to consider.

You can bet on who will hit the most 180s in a match, the total number of maximums by both players in a contest, which player will score the highest checkout and even how high that finishing effort will be. Bookmakers will often offer the tie in many of these markets, which would win if two players hit five 180s each in their match, and that is worth keeping an eye on.

Another way to get involved is via handicap betting. This gives a start to a lesser rated player and forces their more fancied rival to give up legs or sets. Handicap betting is an interesting way to bet because essentially the bookmaker has already done the hard work for you by setting the start each player will receive, you just have to decide which side of the line to play.

To finish our guide, let’s take a look at our top five darts betting tips.

The day of darts being just a game played in British pubs and clubs are gone, with a surge in television interest and a big increase in prize money has seen the popularity of the sport skyrocket all over the world.

With the image of the game adapting and the standard forever improving, darts has quickly established itself as one of the most popular sports in the world.

For many sport fanatics, the World Darts Championship at Alexandra Palace plays a key role at Christmas and betting turnover continues to increase in line with the sport’s growth.

There are now many high profile tournaments staged all over the world throughout the calendar year, so we have picked out five things that you should factor in before parting with your hard-earned cash.

There are more competitions now than ever before and the PDC are undertaking tours all across Europe, with recent tournaments being staged in the likes of Germany, Denmark, Netherlands and Austria.

When players click into form they tend to hold onto it well and a narrow miss one week can often mean they go one better the next. Keeping in-form players on side can be a profitable exercise.

It is also worth considering that some of these minor events feature relatively unknown prospects that bookmakers haven’t yet got a grasp on, so creating a quick impression on those rookies can often yield a profit.

The PDC Players Championship events now take up a big part of the darting calendar but the form of those floor events doesn’t always translate to a TV competition on the big stage.

One fine example of this would be the results of Michael Smith. ‘Bully Boy’ won Players Championship event 27 in Barnsley just over a fortnight ago but doesn’t win anywhere near as much as he should given the ability he retains.

Smith still awaits a first Major title yet is without doubt one of the most naturally gifted players on the PDC Tour. It is no coincidence that the same old faces win when the cameras are out and a passionate crowd are in attendance. Some just handle the pressure better than others.

3. Crowd Advantage is a Factor

As we saw at the World Series of Darts Finals in Amsterdam recently, having the crowd on side can play a key role in the outcome of a match.

In the preliminary round of the competition, there were six Dutchmen and four of them booked their place in the second round which included Vincent van der Voort overcoming Nathan Aspinall and Niels Zonneveld getting the better of Dave Chisnall.

An atmospheric home crowd played their part and we also saw this happen at the World Championship in 2020 when Fallon Sherrock sprung a surprise on Ted Evetts and Mensur Suljovic to make the third round.

From leg play, to set play and even double-in, double-out, there is something for everyone and some formats lend themselves to an upset more than others.

The shorter the format, the more likely we are to see a surprise result. Punters should always respect the short format – for example a best-of-11 leg contest – and that is when there can be great value in siding with the outsiders.

Set play in the latter stages of the World Championships is when class tends to come to the fore.

5. Take Advantage of the Variety of Side Markets on Offer

Picking the winner can be fun but it is not the be-all and end-all as there are an array of side markets for punters to take advantage of.

A popular market is backing a player to hit the Most 180s, and it is a good market to get involved with because heavy scorers aren’t always respected like they should be.

For example, Van Gerwen is one of the best players in the world but he isn’t a regular maximum hitter as he likes to switch to 19s. The Dutchman is still likely to be strong in this market despite his opponent.

A player doesn’t have to win the game to record the most 180s and there is often value to be had in siding with a big-scoring underdog.