Day 4 of the Royal Ascot Festival 2021 and we have previews for all the races on the card. 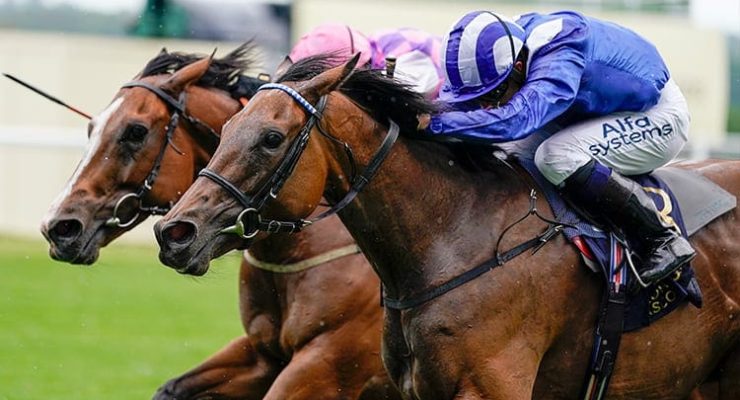 The penultimate afternoon of Royal Ascot action descends upon us on Friday and it’s a double-helping of Group 1 fare as the Commonwealth Cup and Coronation Stakes headline the card.

Note: the previews below refer to the 2021 Royal Ascot Festival; check back in closer to race day for the latest tips and predictions for 2022.

Betting on Day 4 of the Royal Ascot Festival can be challenging to navigate.

Our horse racing expert tipster Enda McElhinney previews every single race from Day 4 of the Festival and picks his favourites for each of them.

These look a super-talented bunch of 2YO fillies and this therefore is a hot renewal of the Albany. Both Hello You and Flotus were visually impressive (wide-margin) first-time-out winners at Wolverhampton and Goodwood recently but there was also lots to like about the Kempton success of SANDRINE for Andrew Balding last month – most notably the fast time clocked and the manner in which she was dominating late on. The Bobby’s Kitten filly is expected to improve and relish this stiff track.

Sandown’s Classic Trial in April deservedly went the way of ALENQUER for trainer William Haggas despite Tom Marquand’s mount briefly wandering around late in the piece. Form boosts don’t come any better than the runner-up Adayar scooting clear to win The Derby itself at Epsom subsequently, but everything about that Sandown form reads strongly. With his Newmarket handler in hot form just now, Alenquer is very much the one to beat and any rain that falls will not inconvenience him.

Campanelle won the Queen Mary here last summer and is a big contender for Wesley Ward in a race she’s been aimed at since the Breeders’ Cup defeat over a mile in November. Unbeaten French filly Suesa is a massive threat to all seemingly but maybe SACRED – second to Campanelle last June – is the value for that pairing of William Haggas and Tom Marquand on what could be a big day for them. She didn’t get home in the 1000 Guineas but her Nell Gwyn win previous to that was hugely encouraging and track and trip are ideal now.

The 1000 Guineas winners of England, Ireland and Germany grab plenty of headlines in a strong Coronation Stakes field and Mother Earth, Empress Josephine and Novemba are much-respected. So, too, Pretty Gorgeous who should improve from her run in that Curragh Classic last month but her old rival SHALE is maybe overlooked in the betting. Donnacha O’Brien’s daughter of Galileo enjoyed a cracking rivalry with Pretty Gorgeous last season and is another likely to leave behind her seasonal comeback effort. If she recaptures her best, the price is too big.

The face that it opened up 10/1 the field tells us plenty about the Sandringham, and cases could be built for lots of these fillies. One worth looking out for is POMELO, a daughter of Dubawi racing for Ralph Beckett in the Juddmonte colours. She won 2-3 starts last year, failing to give best at Goodwood when favourite in a Group 3 in August on very soft going, and could prove herself better than this initial handicap mark.

Despite sharp rises being doled out by the handicapper, the recent successes of Aaddeey and Quickthorn ensure they command plenty of respect here, both were put up 13lb however for wins at Newmarket and Haydock last month. MIRANN has run well in three Irish starts over shorter this term, looking very unlucky last time at the Curragh when second-best, and Johnny Murtagh’s son of Motivator will surely relish this return to a mile-and-a-half.

A flying five-furlong finish to Friday’s card and it’s another wide open handicap in store. Boomshalaa and Mo Celita are in excellent winning form, while Equality is a handicap debutant with possibly lots to offer, but DREAM COMPOSER is no forlorn hope to give Laura Pearson more Royal Ascot success this week. The French import has won lesser events at Carlisle and Kempton of late, finishing to good effect. He’s in much tougher company now but his rider claims a useful 5lb and we may not have seen his limit reached just yet.

*All odds correct at time of writing